Photo galleries on the old Mk 1, 2 & 3 web site were loosely arranged into themed albums, such as people in uniform or sporting groups, mug shots of individuals, old and new photos, reunions, etc. These were assembled onto the web site using various free software found on the internet, which were awkward to maintain when adding or amending new pictures.

The new galleries are an integral part of the Serif WebPlus software that is used onwards from the Mk 4 web site and albums can even be viewed on mobile devices such as tablets and phones. Some pictures have a hover-over facility to enable a person's name to pop up, else a picture within an album is captioned.

Here are a couple of examples of pictures sent in.

Poor original resolution - badly scanned photograph from a cheap 110 film camera. That's me on the far left, with Colin Channon (100th I think), Bill Joisce (99th) and Glyn Bolderson (95th). The photo was taken at Goose Bay - Canada in winter in the late 70's when we were Victor tanker crew chiefs on 57 Sqdn at RAF Marham.

This is a better quality photo taken with a decent digital camera showing us outside Halton House during 2006 Reunion.

Please send in anything you would like included on the web site, preferably as a large .jpg/jpeg file. Eventually there may be a facility for you to upload photos directly to the web site. 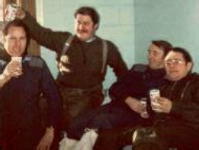